The Path to First Words

The first year of your baby’s life is a flurry of excitement and many firsts, often culminating with their first word and first steps around the first birthday. In this first year of life, your baby will develop many milestones that will be the building blocks for future communication skills. The rate at which kids reach their speech and language milestones can vary depending on both the child and their environment. However, despite a bit of difference between children, we expect most kids to develop particular skills within a specific time range. Let this serve as a general guideline, and a peek at some of what you will hear before your child’s first words. 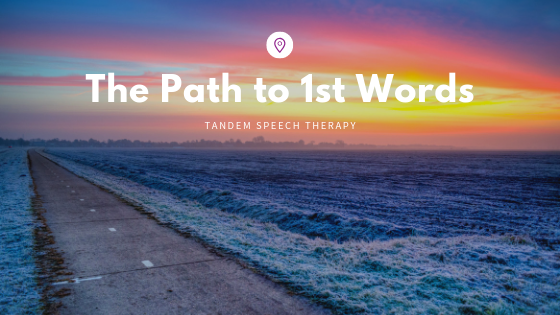 Babbling takes many forms and evolves as your baby grows, beginning around six months of age. Babbling is distinguished by your baby’s use of consonant sounds and not just the vowels you heard when he/she was cooing in the few months prior. There are three types of babbling:

1. Reduplicated babbling is when your baby repeats the same consonant-vowel syllables in a long string. It may sound like “babababa” or “mimimi.” Reduplicated babbling occurs at 6-8 months old.
2. Variegated babbling is slightly more sophisticated. It combines different consonant-vowel syllables in strings instead of repeating the same one. It will sound like “buh-duh-gah.” Variegated babbling occurs at 8-10 months old. At this age, your baby may also try to imitate other speech sounds and use a kind of singing voice when babbling.
3. Conversational babbling (AKA jargon) will resemble “talking” as your baby will play with intonation and different vocal patterns. It includes long chains of babbled sounds that vary in intensity and volume. Conversational babbling is the stage just before we begin to hear intentional first words and occurs at 10-12 months old. It sounds and will look like your baby is having a conversation with you (gestures and facial expressions included), but does not contain any recognizable words.

For a “word” to be a real word it must fit the following two criteria:

1. The word must sound somewhat like the real, adult version of the word. As a speech therapist, I do not expect perfection, but an approximation (such as part of the word) counts. It is also important to remember that children are not born being able to produce all the speech sounds of their language. It is a process that happens over many years, so words can have errors yet still sound like the real, adult word. For example, a toddler may say “Ta” or “tat” or “ca” or “cak” for cat and those all could be considered a word as long as it also meets the following criteria.

2. To be a real word, the word must also be used consistently in the presence of the object with intent and meaning. For example, a six-month-old saying “dadadada,” while he is playing with his toys while daddy is at work, is likely not using a true word. A 10-month-old who says “dadada” when daddy walks in the door and says it while looking at daddy (showing meaning and intent) and does it consistently (meaning many different times) is most likely a real word.

The first words children use tend to be nouns. In fact, around 65% of your baby’s first words will be nouns (person, place, thing). So mama or dada can be a child’s first word, but won’t always be! First words are also often the items your baby sees and interacts with all the time. The other 35% is made up of action words, modifiers (colors, descriptions), or social words like hi, no, or bye-bye.

Finally, between 12 and 15 months your baby should be communicating even if it is not with words. They will pointing, gesturing, making eye contact, smiling, laughing, protesting and even walking. Your baby should also be imitating gross motor movements (like stomping feet or clapping hands) and responding to his name.

Given all that, development is a spectrum and there is a wide range of what we see in children. If you have concerns, talk to your pediatrician or another professional. You can also download my milestone checklist to keep track of speech and language development.

I want the Milestone Checklist

Tandem Speech Therapy
5.0
Based on 6 Reviews