Communication is so much more than talking. So as a speech-language pathologist I think a lot about gestures. The words “speech language” in my job title may have given you the impression that I solely focus on how children express themselves. However, a hugely important piece of communication development happens before your child says their first word.

We define a gesture as an action, or movement of part of the body, especially the hands or head, used with the intention to communicate an idea or meaning. Many gestures we do with our hands, like your child pointing to her cup on the counter to request it. But gestures can also be facial expressions such as your son smacking his lips indicating he wants to eat or your daughter arching her back to show she’s refusing something. 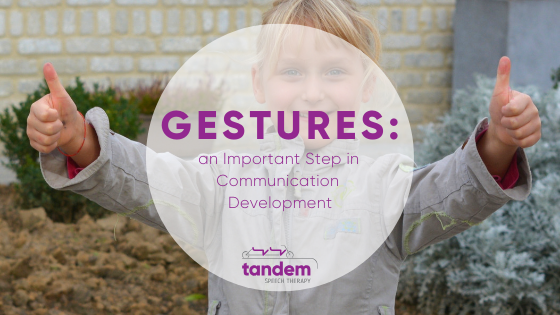 In case you were wondering, encouraging your child to use gestures will not hinder their speech and language development. Again, there is a strong link between gestures and communication development. For example, we know that a child who shows you or points to an object will likely learn the word for that object within three months. And children who produce more gestures early on have larger expressive vocabularies later in development. Additionally, research suggests that gestures pave the way for language development. In 2005, Iverson and Goldin-Meadow found that “children who first produced a gesture + word combination were also first in producing two-word combination,” an essential 2-year-old milestone.

Children will often begin using gestures as early as 8 or 9 months of age.
Here are some general guidelines for gesture development:

9-12 months: imitates clapping, shows and gives objects to adults, reaches to be picked up, waves bye, gains attention by making physical contact like grabbing your leg, requests objects by pointing, anticipates and initiates a social game like peek-a-boo (link) by covering their face with a blanket
12-15 months: hugs stuffed animals, claps to show excitement, dances to music, give objects to adults to ask for help, demonstrates the functional use of objects such as brushing hair with a comb
15-18 months: points to get you to do something, shakes head for no, points to objects on request, indicates all done by putting hands up or shaking hands, points to objects for adults to name or label
18-24 months: blows kisses, makes funny faces like sticking out their tongue to gain attention, slaps your palm for a “high five,” shrugs shoulds or puts hands up to indicate “what’s that?”

Gestures are crucial for language learning. One of the most valuable gestures for children to develop is pointing. I wrote about it, in depth, in a previous blog post. Pointing and other gestures allow a child to communicate their wants and needs months before they can produce verbal speech. Children learn communication by observing, listening, and imitating the world around them. So show your child what to do (i.e., demonstrate gesturing) when you play, talk, sing, and enjoy time together.

Tandem Speech Therapy
5.0
Based on 7 Reviews